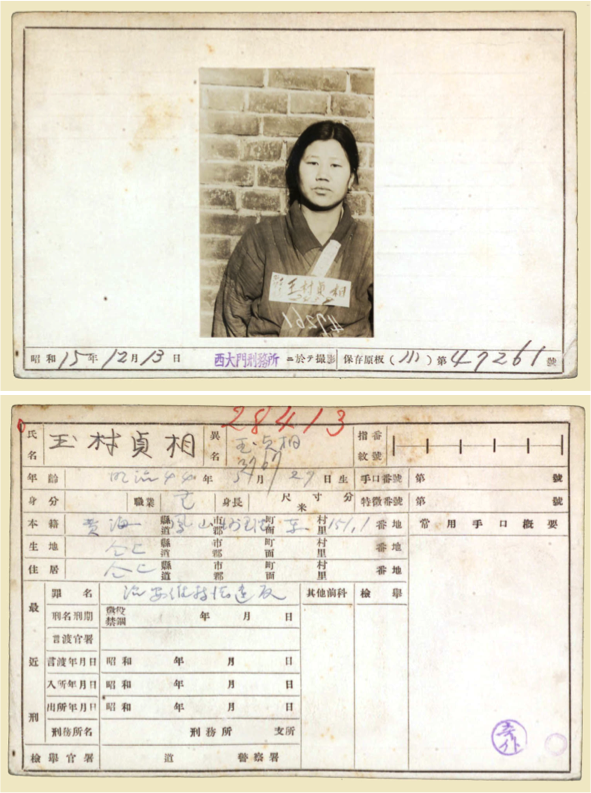 Baptized in 1938 and joined the Deungdaesa

Sentenced to two years and a half years’ imprisonment; 300 days served before the verdict included

Transferred to the “protective custody” camp in Cheongju after completing her prison sentence.

The suspect’s reputation and behavior:

The suspect was diligent in the household chores and no defect has been found. The reputation is modest.

She is a Christian with her parents and husband thus has no possibility of being rehabilitated.

Q: Do you believe that the current Bible interpretation by the Deungdaesa is the right one?

A: I have absolute trust in it.

Q: Are you not of a mind to covert?

A: I’m not sure if I will convert in the future, but I am not willing to convert right now.

Q: Are you in absolute subjection to God’s commands (not to the emperor’s)?

A: Since the Bible says at Acts 5:29 that “we must obey God as ruler rather than men,” I choose to obey only God’s commands. Even the threat of martyrdom won’t change my decision. That means I’ll never willingly submit to anything that contradicts Jehovah God’s commands, even if that’s the law of the land. Things like social status, fame, and money don’t matter to me. Even if I have to give up all claims to such things, I’ll still obey only him.

Q: What is your feeling now?

A: What I have done until now is a service as one of Jehovah’s Witnesses. I have done what I must do as a child of God. That’s never a bad thing.

Q: Are you not willing to convert to being a good subject of the Japanese empire?

A: Since I was baptized I have endeavored to understand the Bible as one of Jehovah’s Witnesses. I have no mind to convert to being a good subject of the Japanese Empire.

Q: Since becoming one of Jehovah’s Witnesses, have you ever joined in shrine worship?

A: The Bible says that we must not worship any other gods except Jehovah God. To keep the commandment, I have never done it.

Q: Since becoming one of Jehovah’s Witnesses, have you ever joined in worship of the royal palace?

A: For the same reason that I mentioned just before, I have never done it.

Q: Do you still believe that the doctrines of the Deungdaesa are the truth?

Q: You said in the preliminary trial that you would give up the doctrines of the Deungdaesa after learning that they oppose our government. Was that a lie?

A: I answered in the preliminary trial just as the judge asked me. I think I have never said that I would not believe in Jehovah God.

Q: What is your feeling now?

A: The only thing I desire is to receive Jehovah God’s approval and his blessings.