Time required to view the exhibition:

A special exhibition commemorating the 80th anniversary of the Deungdaesa Incident, themed Changing History, Unchanging Conscience, was held at the National Museum of Forced Mobilization Under Japanese Occupation. The museum is located in Busan, and the exhibition was shown there from November 12 to December 13, 2019.

Busan is where some of the individuals involved in the Deungdaesa Incident, such as Jang Sun-ok and Kim Seong-nyeo, participated in evangelical work before being arrested. It is also where many South Korean civilians relocated during the Korean War. Busan also holds historical significance for the Deungdaesa itself. Now called the Watch Tower Bible and Tract Society of Korea, the organization was first registered there. On March 9, 1975, officials from the Military Manpower Administration Office raided Kingdom Halls (the name of the buildings used for worship by Jehovah’s Witnesses) in Busan and forcibly arrested those who objected to military service due to their Christian conscience. Therefore, it was especially meaningful to hold the Deungdaesa Incident exhibition in the city of Busan. The National Museum of Forced Mobilization Under Japanese Occupation was also an appropriate venue as its purpose is to provide guests with the opportunity to think about human rights, peace, and harmony. 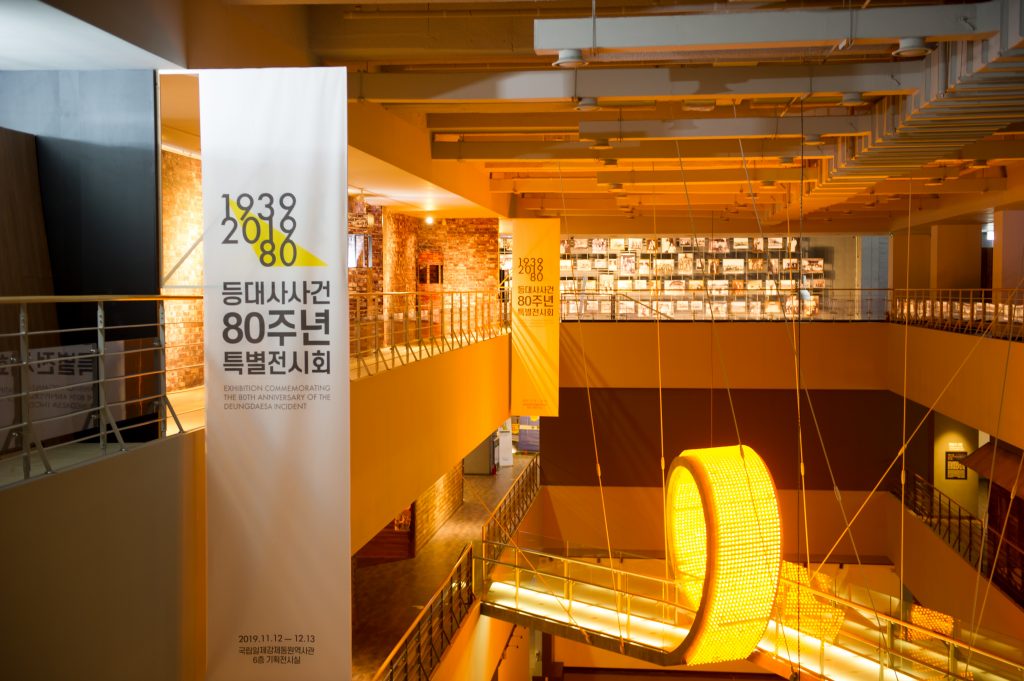 The opening ceremony was held on the morning of November 12, 2019. Noteworthy attendees included Mr. Seung Seon-ho, director of the Seodaemungu City Management Corporation; Mr. Park Gyeong-mok, director of the Seodaemun Prison History Hall; Professor Han Hong-gu of SungKongHoe University; various human rights attorneys; descendants of the Deungdaesa members; and conscientious objectors whose trials are still pending. Chung Woon-young, one of the board members of the Watch Tower Bible and Tract Society of Korea, commented: “Regarding the Deungdaesa Incident in Chosun, Japanese historian Sasaki Toshiji remarked: ‘Most Christians compromised their stance. However, those involved in the Deungdaesa Incident didn’t compromise their Bible-based conscience.’” Mr. Chung added, “In spite of persecution by the government, they did not hesitate to declare their religious beliefs.” One of the descendants of a Deungdaesa member, who is also waiting for alternative service as a conscientious objector, said, “The good example of my grandfather during the Deungdaesa Incident has motivated me to be firm in my beliefs and to stand by my conscience.”

The Busan exhibition was held in the same format as the one held at the Seoul Seodaemun Prison History Museum in September 2019. The most popular parts of the exhibition included the mock prison cell depicting the deplorable conditions of the Seodaemun Prison, a model of the watchtower that was used at this prison, and a mural highlighting the stories of each Deungdaesa member.

The exhibition also attracted many visitors from other countries. Last December two Filipino visitors said that now they are able to fully understand the situation experienced in Korea during Japanese occupation. The Philippines was also under Japanese occupation, and during that time a few Filipinos suffered harsh treatment due to the same Maintenance of Public Order Act that affected Deungdaesa members.

Around 600 visitors left comments on a feedback page. One of the visitors said, “After considering how the Deungdaesa members refused to compromise their conscience, I have now set a higher standard for how I should live my life.”

Trial documents and other materials are being exhibited at the National Memorial Museum of Forced Mobilization Under Japanese Occupation, in Busan. Four generations of one family were imprisoned for a collective 28 years because of their conscientious objection.

They endured severe injustice during the Japanese colonial era and demonstrated the core value of peace that humanity must defend.

Ecobs News, November 11, 2019, “Special Exhibition Commemorating the 80th Anniversary of the Deungdaesa Incident to Be Held in Busan November 12 to December 13”

A special exhibition commemorating the 80th anniversary of the Deungdaesa Incident will be held at the National Memorial Museum of Forced Mobilization Under Japanese Occupation, Busan, from November 12 until December 13 following its installation at the Seodaemun Prison History Hall in Seoul.